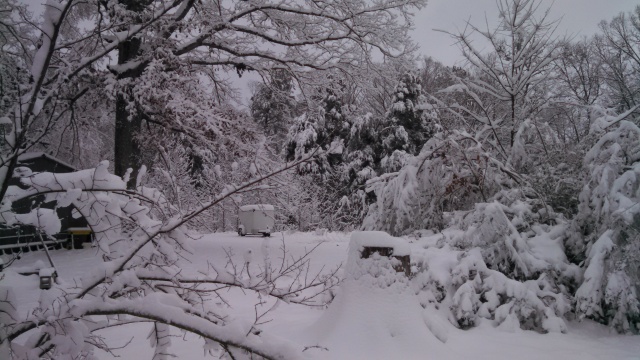 Well, we finally got real snow here in North Carolina, after 2 rounds of Southern Snow Panic that didn’t quite pan out. There’s a solid 6-8 inches of beautiful packy, heavy, tree-limb bending, perfect snowball snow. Waking up this morning, everything was glowy and beautiful, with that perfect stillness that follows a heavy snowfall.

Of course, that means that EVERYTHING IN THE STATE is closed. People joke that there’s only 2 snowplows in NC, which isn’t true: hard working snow plow folks are trying to get the roads open, and all the local electric companies are working to restore service knocked out by heavy snow on tree limbs. But it’s going to take a while, and it probably won’t be warm enough for it to go away for a day or two. Luckily, we still have power (unlike the great ice storm of 2014), and our rural road was plowed by 2pm or so, and all is well. And you know, it will be 60 degrees on Monday.

I love it here.

The people, rabbits, and our Aussie are all super excited about the snow, but the chickens and the very small dog are definitively NOT. Apparently one’s enjoyment is lessened when your undercarriage is actually IN the snow. Don’t reckon I’d enjoy that either. So we’re hunkered down (the people and dogs, not the chickens) in the house, working on projects and enjoying the beautiful view.

We’ve been cooking up a storm here lately, partly inspired by Acorn the pig going to freezer camp, and partly by our absolute obsession with the Great British Bake Off. Do you know this show? It’s on the BBC, but PBS is replaying it (renamed The Great British Baking Show), and it’s free on their app. A friend recommended it on FB, arguing that it’s all the things the Food Network and Cooking Channel’s competition shows COULD be, but aren’t. It’s heartwarming, the sets are beautiful, and mostly…the baking is fabulous, real and interesting and technical and humanly flawed. I want to both make and eat nearly EVERYTHING they make. And British baking is familiar enough but still deeply weird (spotted dick! puddings! suet crusts! pork pies!) that I watch with google handy, to figure out what the hell they’re talking about.

The direct outcome of this is that we’re snowed in with a fridge full of wonderful things: lemon tart, cornish pasties, a bit more smoky pumpkin soup, a pork belly I roasted last night, and of course our own sausage and bacon and eggs and sourdough bread (post coming, I promise). Instead of adding to the bounty, we’re going to grab the free time and whomp up another batch of sauerkraut.

Now, if you want a diatribe about how good fermented foods are for you (they are, they really are), there’s plenty of places on the web for that. Start here: Sandor Katz. And of course, there’s also plenty of pinterest-y photos of charming jars lined up with ribbons and a clever background. I’ve got no time for all that (see also chicken sweaters, pimped out chicken coops, charmingly arranged farmers market vegetables, cocktails in mason jars, long-winded soliloquies about the virtues of bone broth)…but I KNOW good food when I taste it. And kraut is delicious, easy, and a great refrigerated staple. We like it baked with pork steaks, and on the side of almost any main dish. I even like it in the morning with eggs. It’s like a magical little pile of savory goodness that brightens up a meal.

Visiting the East Bay a few years ago, I tasted this amazing kraut with leeks, carrots, and horseradish in it, which was like the world’s best pickles. Savory, salty, intensely flavorful. I hauled a pint home, and set about trying to recreate it. And now, I think we’ve got it down. I make a batch every couple months, and we always manage to eat it all before the next one is done. There are, of course, loads of recipes and directions (some VERY complicated) on the web, but here’s what I do: 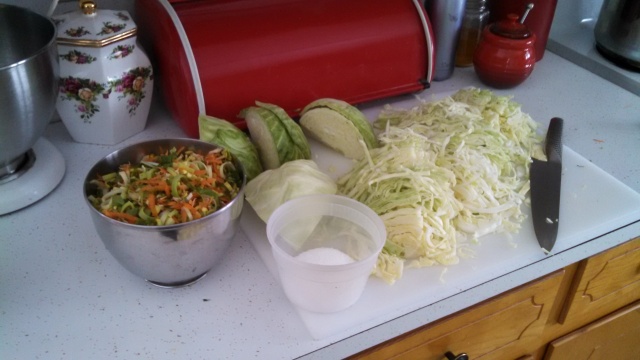 Tools needed:  A large container for fermenting (or a couple big mason jars), a good sharp knife, a bowl for mixing, a grater, patience, time.

Pull a couple of the outer leaves off of the cabbage before cutting it (it’s fine if they rip a bit), then quarter, core, and thinly slice the cabbage. Dump about a third of it into your container. This could be a bucket, an old pickle crock, or you could mix it in a bowl and then pack it into a couple of mason jars. Add 1/3 the salt, and 1/3 the flavoring stuff. Mix it up, crushing the cabbage with your hands. You’re trying to break the cells and let the high water content of the cabbage come out to play. When you’ve mashed it up enough so that it feels wet, add another third and repeat.

I often use an old rolling pin whose handles have fallen off to really mash it around. And truthfully, being pretty arthritic, I often call on my sweetheart (hereafter referred to as E, because she’s NOT a fan of an online presence for herself) to beat the hell out of it. Repeat again with the last third. At this point, it should be firmly packed into the container you’ve chosen. Take a look at it: 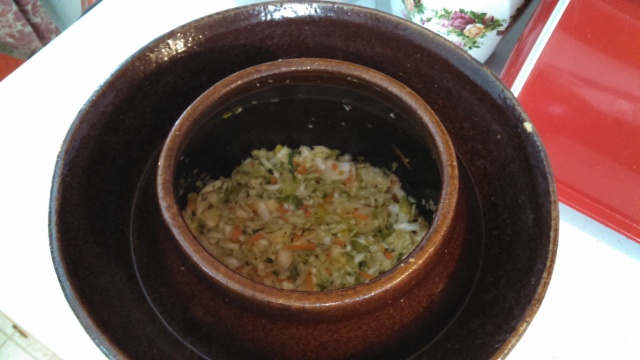 Is it pretty wet? Every recipe I’ve ever read for kraut says to mash it until enough water comes out to cover it. Pro tip: THIS HAS NEVER EVER HAPPENED FOR ME, and the kraut is always delicious anyway. Never fear. Top that sucker up with enough water to just cover your carefully abused cabbage and goodies by about half an inch. Then tuck the reserved cabbage leaves over the whole mess. This keeps the cabbagey bits from floating up to the surface.

Now you’re going to need to weight it down. I have this fancy German pickling crock that I found on Craiglist, (one of these) but it came without the weights. So I just stick a plastic lid from a container of goat cheese on top of the cabbage, and then put a glass paperweight on top of that. You’re trying to keep the cabbage below the surface of the water. Many folks use a smaller mason jar to weight this down, and before I had the genius idea of the paperweight, I used to use a really clean rock. You could also use a baggie full of salt water (in case it breaks and dilutes your brine) as a form-fitting cabbage weight. Cover your container with a clean dishtowel, to keep out bugs and debris, and put it somewhere out of the way. 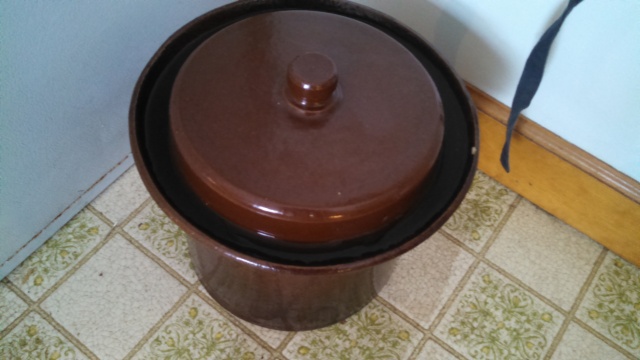 Resting, next to the freezer.

Then you’re just waiting. It’s going to slowly start to bubble. If you’re doing a small batch, taste it in a week or two. Big batches (like the five pounds above) will likely take on the order of a month or so. Fish some out periodically and taste it. When it’s as tart and crunchy as you like, put it in jars and into the fridge. Remember, it’s perfect when it tastes perfect TO YOU, not some arbitrary standard. Will keep for years refrigerated, but I PROMISE it won’t last that long.

Makes lovely gifts too. And you know how much this stuff costs at the Whole Foods? It’s madness. Cabbage, salt and time.

12 Responses to Snow Day: with Cabbage, Salt, and Time