Last year, local friends of ours convinced us to join them in beekeeping class at the county extension office*. And, as is our usual pattern of being NOT QUITE READY for new critters before we actually get them, right as we started we were offered a second hand hive from a friend. Despite our (my, mostly) trepidation at moving a large heavy wooden box full of STINGING creatures, the move went well and we installed our new tiny livestock here at the Farmlet.

However, as we worked our way through the class and our initial season as beekeepers, it became clear that what we really wanted to try was a top bar hive, rather than the standard Langstroth hive (That picture in your head, of a beehive? It’s a Langstroth hive). You see, top bar hives have several advantages: First, you can totally build them yourself, if you have even a passing acquaintance with tools. Second, bees in top bar hives are more pest resistant, and third: you’re actually disturbing the bees much much less with a top bar hive. 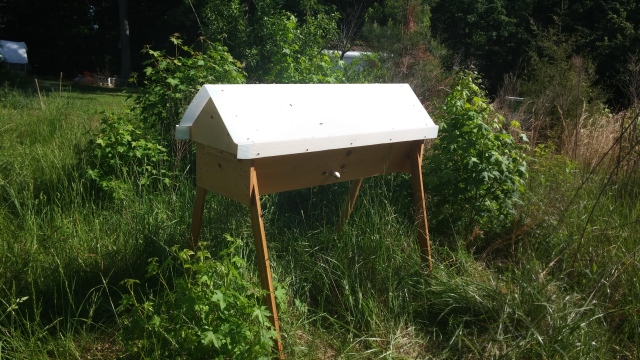 The Russian bee house: built, of course, by the handy member of the Farmlet.

They actually look and function quite a bit like a hollow log, laid on its side. And while a Langstroth hive is set up for the convenience of the beekeeper (and to maximize honey production), the top bar hive mimics the bee’s natural environment as much as possible.

So for this spring, we ordered a package of Russian Bees (more pest resistant than the standard Italian, plus they wear charming little fur hats**) from Kelley Beekeeping back home in Kentucky. And Monday, we got the call from our post office, our bees had arrived! I rushed over to pick them up, to grateful thanks from our postmistress since there were a couple of escapees crawling around the outside of the box. 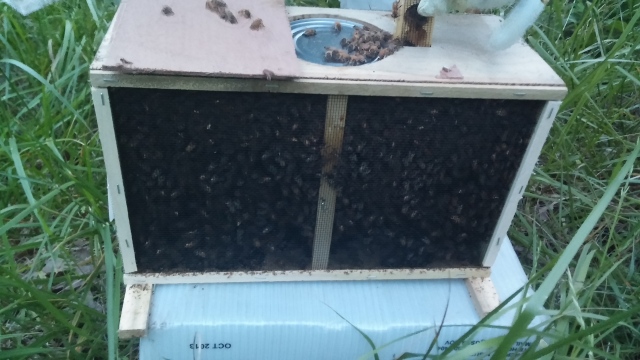 A box of bees.

Here’s what bees look like, sent through the mail. Wouldn’t you be surprised to find THAT in your mailbox? There’s 3 pounds of bees in there, 6,000-9,000 workers and just one queen. In the picture above, E has pried off their lid. You can see the metal can of sugar syrup that’s been nourishing them on their journey across the Southeast, and the tiny cage that contains our new queen.

You see, the workers want to be where the queen is, so in order to install them in a new hive, you put the (locked up) queen inside the hive, and the workers know where to return. Her little cage is plugged with a chunk of candy, and the rest of the bees work to free her over a 3 day period, at the end of which everyone knows where home is, and they get to work. 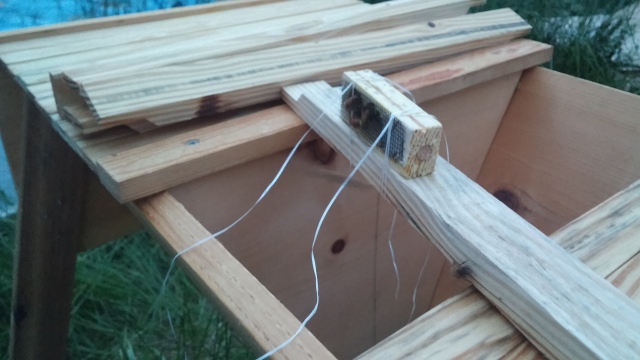 The queen about to be in her castle.

In the photo above, her cage has been tied to one of the top bars, which is then flipped over, suspending her over her new domain. Cool, right? And as of this morning (Wednesday), she’s not quite free yet, but the other bees are hard at work chewing her out. After the queen was settled in her new home, E (who is TOTALLY head beekeeper in these parts: I’m the assistant) pulled out the can of syrup and shook the bees into their new home.

At the end of this process, we put the (now largely empty) package under the hive, so the rest of the bees could find their way home. And the next morning, they were hard at work! Flying in big swooping circles over their new hive, which is how they learn their location…flying off in search of nectar and pollen to build up their new home and then fill it with honey. We’ll feed them for a short while, until they’re totally settled in, but then they become the easiest livestock (and the hardest working) here at the Farmlet.

Here’s to a well-pollinated garden and happy new bees!

*Interested in bees? You should totally check out a beekeeping class. They’re offered in most areas, are not expensive, and you’ll learn a ton about these fascinating creatures. Plus, it totally removed my bee anxiety.

**This is a joke: bees don’t wear hats

Nerd. Cook. Animal lover. Pen for hire.
View all posts by faegood →
This entry was posted in Bees, Homesteading, In the garden. Bookmark the permalink.