This is the tenth morning after the baby buns were born, and right on schedule, we have open eyes! Grace’s kits are ALL OVER the nest, now that they can see where they’re going, and Rhetta’s (born 12 hours later) aren’t far behind. I can’t believe how big they are now: going from squishy little strawberries at birth to fat little apples now. They’re furry, and incredibly soft, and equal parts curious and scared about the world. 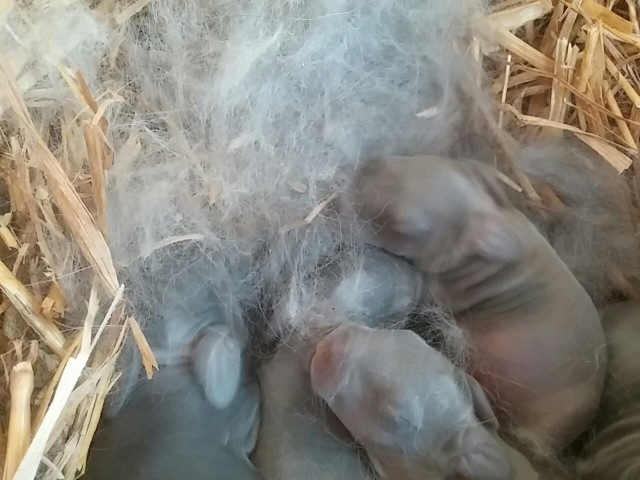 They’re not too into having their photos taken, and it’s pretty much a three handed job now that they can hop, but here’s one more quick one that shows off beautiful ears:

Any minute now, I’m going to have to stop calling them the Baby Buns, and move on to Small Buns. From here on in, it’s light speed: in another week they’ll be getting in and out of the nest, then we take it away, then they’ll wean, then they’ll go in the grow out tractor. Speedy rabbits.

It’s been 60 degrees here the last few days, perhaps to make up for the Arctic Pig and Pie, but the plants, critters, and people are all happily soaking up the sunshine. Here’s last evening on the porch, after tilling the garden edition (E) and making an enormous batch of scrapple from the pig remains (me). 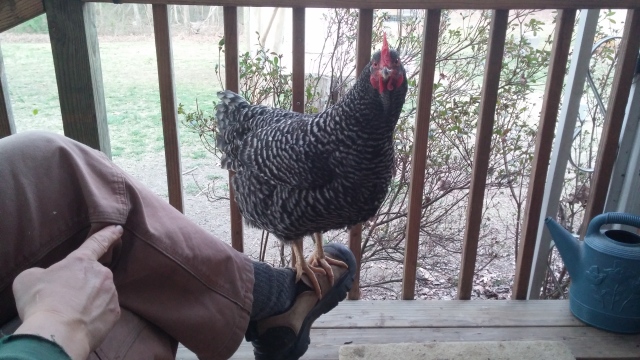 “They only THINK they’re in charge.” ~Hermione G. Chicken

Hermione’s ‘helping’, as she does. And one last shot before I go: