Just in case you’ve been on pins and needles about how the Impulse Chickens are doing, I’m happy to say they’re settling in well: peeping their fool heads off, sleeping, eating, and pooping. It’s good to have a purpose, right?

They finally have names, as well. The Buff Orpington (yellow chick) is Buffy, the white-feathered one (whose breed we still don’t know) is Marilyn, and the one that looks like a chipmunk is Treacle. Yes, the obsession with the Great British Bake Off is still in full force over here, when I’m naming chickens after ingredients. Could have been worse…I could have named her Pork Pie.

It was a near thing. 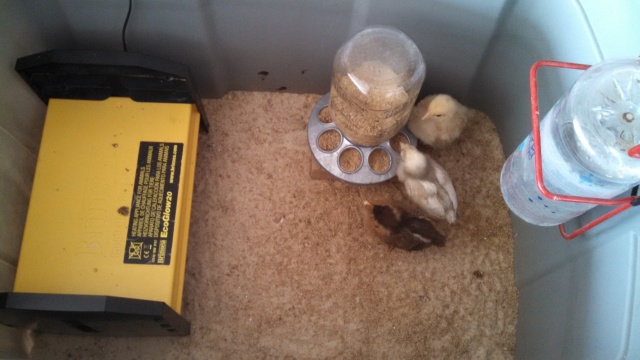 Sky view of the Chick Palace (a tub in the sunroom).

That’s all for today, but check back in tomorrow, when I’ll have a new recipe: Pickled French Green Beans. They’re like Dilly Beans, but fermented and with a sexy accent. You’ll see.

Nerd. Cook. Animal lover. Pen for hire.
View all posts by faegood →
This entry was posted in Homesteading. Bookmark the permalink.

1 Response to A Quick Chick Check-in